This is a guest post from Sarah Jacobs of Know Your Instrument. 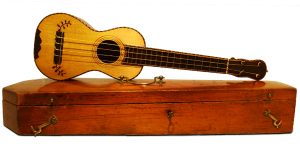 The ukulele is long-hailed as the national instrument of the Hawai’ian islands. It’s played at luaus, family gatherings, and while simply relaxing on the beach. A lot of children in Hawai’i even learned how to play at a young age. For hundreds of years ukuleles have been deeply intertwined with Hawai’ian culture – but they didn’t originate there.

Ukuleles actually hail from Portugal – technically, they are evolved versions of the Portuguese machête. The uke was originally invented in Madeira – a small Atlantic island off the southwest coast. For a short time, this island was a popular tourist spot. After a while though, the island’s economy started declining, and many Madeirans left to find work. 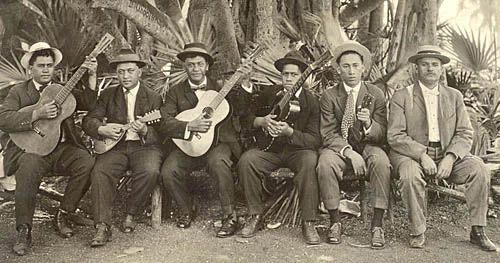 But, if the ukulele is actually Portuguese, why is it such a big deal in Hawai’i? Well, in the 1870’s, the sugar industry in the Hawai’ian islands was booming – but the native population was in decline, and workers were needed. How convenient, then, that there were thousands of Madeirans looking for work, eh? Of the 25,000 workers who came over from Portugal, three of them –  Manuel Nunes, Augusto Dias, and Jose do Espirito Santo – changed the culture of Hawai’i forever.

In 1879, a newspaper in Oahu talked about the Madeirans playing their instruments for the natives. The article praised the Madeirans’ talents, and described the machête as a cross between a guitar and a banjo; but said the instrument “produce[d] very sweet music in the hands of the Portuguese minstrels.”

One may be thinking: where does the ukulele come into play with all this? Well, after serving their contracts in Oahu, Nunes, Dias, and Santo all moved to Honolulu and opened up shop. All three of them began selling, repairing, and making instruments.

The first ‘ukulele’ didn’t appear until a decade after the ship bearing these three made it to Oahu. But who made the first ukulele? Well, no one really knows, to be honest. 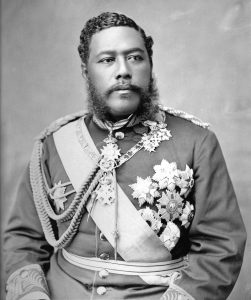 The last king of Hawaii

All three of the men made wooden instruments similar to ukuleles. Santo specifically advertised that he could make “guitars of all sizes,” while Nunes boldly claimed that he had invented the ukulele.

Either way, the ukulele seems to be a mix of two small Portuguese instruments – the machête and the rajão. The uke had the size and shape of the machête but the string layout of the rajão: G, C, E, A (minus the low D, as the rajão has five strings).

During the initial uke craze, the last king of Hawai’i, his then wife, and the future Queen all passionately promoted the instrument. They were avid champions and supporters of music, encouraging the native Hawai’ians to learn how to play the uke. The future Queen, Lili’oukalani, even composed one of the most sacred Hawai’ian songs on the ukulele (Aloha Oe).

Although a fire destroyed Dias’ shop, and the other two eventually closed, the legacy of these men still lives on, through a shop opened by one of Nunes’ apprentices: Kamaka Ukulele and Guitar Works. That shop still stands today.

Want to learn how to play the ukulele? Check out our book “Ukulele for the Complete Ignoramus” by Ted Parrish and Wayne Erbsen.