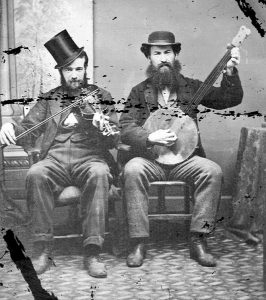 Playing by ear is, or should be, the holy grail of playing music. You just about never see a banjo picker, fiddler or mandolin player performing with their nose buried in a book of music notation or tab. It just ain’t done. Of course, there are plenty of beginner musicians who completely depend on tab to get them started. For these people, when they get to the point where they’d like to go out and jam with other musicians, they find it difficult or next to impossible to give up the addition to tab or music. Like quitting smoking, playing by ear seems like a goal that’s just out of reach.

It doesn’t help that some people will tell you that playing by ear is a natural ability that is born in you. With this way of thinking, you either have it or you don’t.

I don’t deny that natural musical ability seems to be doled out unevenly. Some people have a lot of it, and others don’t even get to smell it. After teaching music for over a half century, I’ve come to several undeniable conclusions. There are relatively few people at the top of the heap who seem to have music flowing out of every orifice. And then there are those people at the bottom who not only can’t carry a tune in a bucket, they don’t even have a bucket! That leaves the vast majority of people in the middle who seem to have enough music in their genes to get by and do fine with a musical instrument if they work at it. For these people, music is like a newly planted seed in your garden. If it’s watered and tended with love, it can grow and blossom.

Here are some tips to help you begin to play by ear:

To make easier your job of picking out melodies by ear, look at the illustration below. What I’ve done is give you the first few notes of some well-known songs. This should get you started. As you attempt to play one tune or another, you’ll have to figure out whether the melody goes up or down the scale or stays the same. Use the scale to guide you. With practice and determination you can make good guesses of what notes to play. If you spend as much time trying to play by ear as you do reading music or tab, you’ll be well on your way to playing by ear. 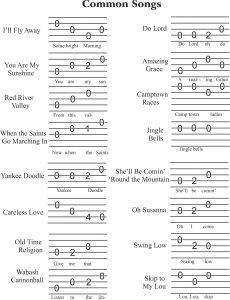 Wayne Erbsen has been teaching people to play music since 1962. Over the years he has produced over 30 bluegrass and old-time instruction and song books for banjo, fiddle, guitar, mandolin, dulcimer and ukulele. Visit Wayne’s website at www.nativeground.com