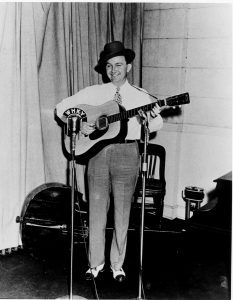 Bluegrass hero Lester Flatt had a lot to be proud of. One of his most lasting achievements was the G Run that bears his name. You can hear this distinctive guitar run in practically every traditional bluegrass song that can be played on the guitar using a G-shape chord. In its original form, it is basically a two-note run that is played at the end of a verse or chorus. It consists of playing the D string of the guitar at the second fret followed by the G string open. It more or less punctuates the song and serves the same purpose as an exclamation point at the end of a paragraph.

In the mid-1970s I was lucky enough to become friends with the legendary fiddler Jim Shumate, who joined Bill Monroe’s Blue Grass Boys in 1945, just weeks after Lester Flatt joined the band. Here is how Shumate explained it in a 1976 interview:

Lester had just started working with Bill when I joined the band. He’d been with Bill two or three weeks. He’d been singing tenor with Charlie Monroe. So he left Charlie and went with Bill at the Grand Ole Opry. I had met Lester when he was working with Charlie, so I was glad he was with Bill. We were both rookies. I remember that Lester always had a funny run on the guitar, and we used to kid about that run. I accused him of doing it just to let people know that he was still there. That’s about the truth, because we’d be going so fast, he’d just hit one string here and there and then every chance he’d get, why he’d run something in there. 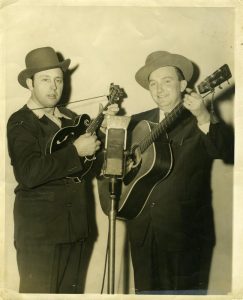 That “something” was Flatt’s signature guitar run. The Blue Grass Boys may have kidded him about his little run, but Lester Flatt’s G Run is no laughing matter to died-in-the-wool fans of traditional bluegrass. In this post I may question whether or not Flatt actually invented that run, but no one can argue with the fact that he gave it its biggest audience when he played it week after week on live appearances and on most Saturday nights on WSM’s Grand Ole Opry. Of course, Flatt continued to play his G Run over the course of his long career with Earl Scruggs and the Foggy Mountain Boys and later with the Nashville Grass.

We can trace the origins of Lester Flatt’s G Run back at least as far as the mid-1930s, when Riley Puckett played a version of it on the August 8, 1935, recording of Blue Ridge Mountain Blues. On June 15, 1936, Zeke Morris played his version of the guitar run when he and Wade Mainer recorded If I Can Hear My Mother Pray Again. If you listen close to the Monroe Brothers’ October 12, 1936, recording of Roll in My Sweet Baby’s Arms, you can hear Charlie Monroe playing something that approaches the Lester Flatt G Run. On November 25, 1939, in Bill Monroe’s very first appearance on the Grand Ole Opry, he amazed the audience with his performance of Jimmie Rodgers’ song “Mule Skinner Blues.” For this number, Bluegrass Boy Cleo Davis chorded Monroe’s mandolin and Monroe played guitar and used a run very similar to the Lester Flatt G Run. Monroe also played the run when he recorded this song with the Blue Grass Boys on October 7, 1940, for RCA Victor Records.

In comparing these early versions of the G Run, the thing they all have in common is that the run is commonly played at the end of a verse or a chorus and it culminates with the open G string of the guitar. What Flatt apparently did was streamline it down just to the two notes, an E and a G which he was able to hit when the band was going 90 miles an hour. As Brian Sutton once said, “It was Lester Flatt who put it on the map.” And for that, we are grateful. Thanks, Lester!

If you’d like to try the Lester Flatt run on the guitar, take a peek at the guitar tab below. The letters on the strings represent the name of the note on that string. The arrow represents a strum down. The feet give you an idea of the timing. Of course, Flatt played with a thumbpick, but you can certainly do it with a flatpick if you wish. 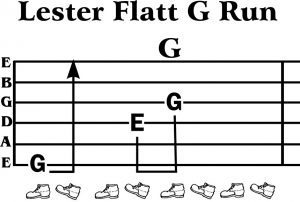