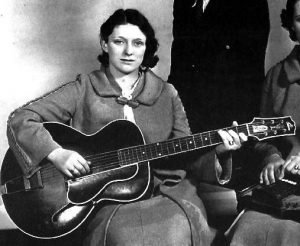 They didn’t call her Mother Maybelle for nuthin.’ Nope. In addition to being the mother of three girls (Helen, June, and Anita), Maybelle Carter was nothing less than the mother of flatpicking guitar. Starting in 1927, her lead and rhythm guitar playing laid the foundation of what would later be known as bluegrass guitar. Her signature lick on the guitar has been referred to as the Carter Scratch, the Carter Family Scratch, or the Maybelle Carter Scratch. That’s because of her way of playing the melody notes on the bass strings of the guitar while vigorously going up and down on the treble strings with her 1st finger. To some, it looked like she was scratching the strings, hence the name. 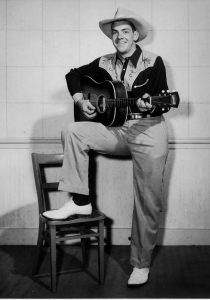 It is ironic that Maybelle played such a fundamental role in creating the guitar sound known as flatpicking guitar, when she actually rarely, if ever, used a flatpick. Bill Clifton, who was one of the first bluegrass guitar players to feature the guitar as a lead instrument, was profoundly influenced by Maybelle’s guitar style. Clifton assumed that she was using a flatpick because he learned from her records before seeing her play in person. It was only later, when he relocated near the Carter Family homeplace in southwest Virginia, that he realized his mistake, but by then he was too far along on the guitar to change.

In searching for the roots of Maybelle’s style of guitar playing, the name of an African-American musician named Lesley Riddle immediately springs to mind. In late 1927,  A.P. Carter met Lesley at a jam session held in east Tennessee that was hosted by John Henry Lyons. Immediately impressed with his skills on the guitar, A.P. hired Lesley on the spot to accompany him on song-collecting trips. When they found someone willing to share an old song that the Carter family could record, A.P. wrote down the lyrics and Leslie memorized the melody. Upon returning to A.P.’s homeplace, they shared the songs they had found with Maybelle and Sarah. It was during those song sessions that Maybelle absorbed much of Lesley’s guitar style. Once asked by Mike Seeger if he gave lessons to Maybelle, he replied, “No, I didn’t have to. She would just watch and learn. She was that good.”

Maybelle Carter went on to be the first musician in recorded country music to use the guitar as a lead instrument. It all started with Bury Me Under Beneath the Weeping Willow Tree, which was the first song the Carter Family recorded on August 1, 1927. On this recording Maybelle used her signature style of playing rhythm and lead at the same time. 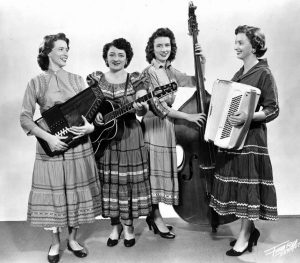 There’s actually not much difference between the Carter Scratch and what’s commonly called the “Thumb-Brush” or the “Boom Chick.” In both of these ways of picking, either the thumb or a pick alternates back and forth from one bass string to another. On the second part of this strum, the bottom three of four strings of the guitar are struck with a downward motion. With the Thumb Brush, the back of the fingernails are used. In flatpicking, the pick strums down on the strings. And in the Carter Scratch, the index finger is used to go down and up on the bottom three or four strings. 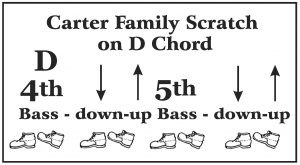 2 thoughts on “The Carter Scratch”