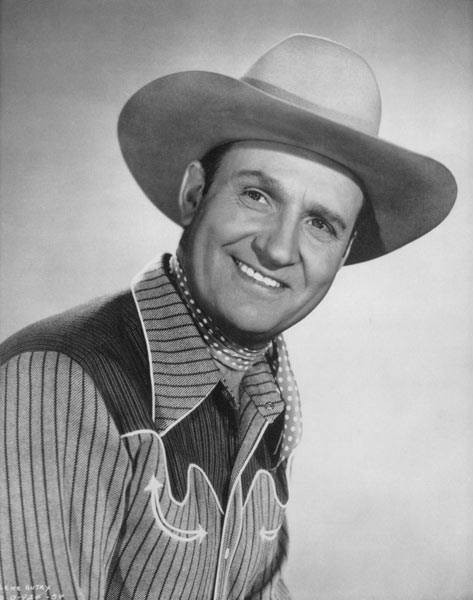 I’ve always been a sucker for a good ole cowboy song. This isn’t because I was born and raised on a cattle ranch in Texas; I’m actually a native of southern California. Growing up in the late ’40s and early ’50s, I was raised on a diet of TV westerns like Hopalong Cassidy, The Lone Ranger, Maverick, Rawhide, The Rifleman, Bonanza, and Have Gun – Will Travel. Actually, I was listening to The Lone Ranger and Gunsmoke on the radio before they became popular TV shows. My favorite movies were Shane and High Noon.

Of course I also watched some of the movies that featured Gene Autry, the singing cowboy. Even though I admired some of his songs like Back in the Saddle Again, I wasn’t too keen on the fact that he was a little too “cleancut” for my tastes. His white hat and freshly starched shirts never had a speck of trail dust on them. I don’t recall him ever getting into a gunfight where someone got shot or even slightly wounded. And predictably, at the end of each program, he always got the pretty girl. That’s what really ticked me off. I preferred my western heroes to be much rougher around the edges, unlike Gene Autry, who always had every hair tucked perfectly in place.

In the early ’60s I got bit hard by the folk music bug that was sweeping the nation. One my favorite performers from that period was Ramblin’ Jack Elliott. To me, he was the perfect combination of a cowboy and a folksinger. Among my favorite songs that he sang was Diamond Joe. I soon learned it and have been performing it ever since. Several years after I started singing Diamond Joe I heard an LP of an old-time group called the Georgia Crackers doing a completely different song called Diamond Joe. I always lamented the fact that Jack Elliott’s song didn’t have a chorus, so I combined the chorus of the Georgia Crackers’ song with Jack Elliott’s Diamond Joe. That’s the way I perform the song today.

Recently I was singing Diamond Joe around the house, and my wife Barbara commented on the chorus (“Diamond Joe come and get me, my wife now done quit me”). She asked “why did his wife quit him?” Since the song doesn’t exactly explain it, I guessed that he was a shiftless, smelly, no-account cow puncher and that she moved on to greener pastures.

All this talk about Diamond Joe made me remember that several years back I had done some research into the origins of the Jack Elliot version of Diamond Joe. With the help of Nick Hawes, I traced the song back to his father, Baldwin ‘Butch’ Hawes, the husband of Bess Lomax Hawes, who was the sister of Alan Lomax and the daughter of John Lomax. Nick told me that in 1944. Butch wrote the song in New York City for a BBC radio program called The Chisholm Trail.

Alan’s wife Elizabeth wrote the script based on the songs from the Lomax collections. The major character in the show was a tough hombre by the name of “Diamond Joe Chisholm.” Elizabeth did not read music so she inadvertently selected a rather stately melody in 3/2 meter that had been transcribed by Ruth Crawford Seeger, Pete Seeger’s stepmother. When she realized that the tune wouldn’t work, it was too late to rewrite the script.

That’s when she called on Bess Lomax Hawes, her sister-in-law, who was the music director of the program. Bess then asked her husband Butch to compose a new Diamond Joe song that would be more appropriate to the story. Since the song was to be performed by Lee Hays of the Almanac Singers, Hawes based the melody of his new song on State of Arkansas, which he knew Hays had been singing for years.

Along with Lee Hays, Cisco Houston was also a cast member of The Chisholm Trail. Cisco didn’t realize that Butch had composed Diamond Joe, and assumed it to be an old authentic cowboy song. In 1952, Cisco recorded it for Folkways records on an album entitled Cowboy Ballads (FA 2022). In 1954, the lyrics he sang of Diamond Joe were printed in Sing Out! magazine.

A few years after Cisco’s record was released, a rodeo cowboy named George Williams apparently heard Diamond Joe from Cisco’s record and taught it to Jack Elliot at a rodeo in Brussels, Belgium, in 1958. It then became a career song for Jack Elliott, and that’s where I learned it.

Here are the lyrics that Cisco Houston sang:

There is a man you’ll hear about most every place you go.
And his holdings are in Texas, and his name was Diamond Joe
Well he carried all his money in a diamond-studded jaw
And he never was much bothered by the process of the law.

Well I hired out to Diamond Joe, boys, I did offer him my hand
And he gave me a string of horse so old they could not stand
Well I liked to died of hunger, he did mistreat me so.
I never earned a dollar in the pay of Diamond Joe.

Well his bread it was corn dodger and his meat I could not chaw,
And he drove me near distracted with the wagging of his jaw
And the telling of his stories, I’d like to let you know.
There never was a rounder that lied like Diamond Joe.

Well I tried three times to quit him, boys, but he did argue so,
That I’m still punching cattle in the pay of Diamond Joe.
And when I’m called to Heaven, and it comes my time to go
Give my blankets to my buddy, and give the fleas to Diamond Joe.

The other Diamond Joe song is a story in itself. It was first recorded for Okeh Records on March 21, 1927, by Paul and Leon Cofer, who were billed as the Georgia Crackers. I’ve always sung the chorus to this Diamond Joe as:

Diamond Joe, come and get me
My wife she done quit me.

After listening closely to their recording, I now realize that years ago I had misheard the recording and have been singing it wrong all along. Here’s what they were actually singing:

Diamond Joe, come and get me,
My wife died and quit me.

So this answers my wife’s original question as to why she left him. She died!

But what is the meaning of the line in the chorus, “Diamond Joe, come and get me?” There is conflicting evidence here. Fragments of the lyrics of this original Diamond Joe were published in the Journal of American Folklore as collected from African-American sources in Mississippi from a Mister Turner by professor E.C. Parrow in 1909. The chorus goes:

Then I’ll buy me a bar ‘el of flour
Cook and eat it every hour.

(Gonna buy me a sack of flour,
Cook me a hoecake every hour).

(I’m gonna buy me a piece of meat,
Cook me a slice once a week).

In 1911, professor Howard W. Odum published an article in the Journal of American Folklore that included a version of Diamond Joe from a woman’s point of view.

Diamon’ Joe he had a wife, they parted every night;
When the weather it got cool,
Old Joe he come back to that black gal.

But time come to pass,
When old Joe quit his last,
An’ he never went to see her any mo’.

And now, finally, we get to the other possible origin of Diamond Joe. Old-time music researchers Gus Meade and Lyle Lofgren dug up evidence that “Diamond Joe” was not a man at all. Instead, “Diamond Joe” was a steamboat line that ran from 1862-1910. According to this theory, the poor cowpuncher in the song wants the steamboat to come take him away.

Delving a little deeper, I discovered that there was a Chicago grain dealer named Joseph Reynolds (1819-1891) who used a logo of JO inside a diamond. He eventually built a steamboat, the Diamond Jo, to haul freight on the upper Mississippi River from St. Paul to St. Lewis. So this might be the Diamond Jo that the poor cowpuncher wanted to “come get him.”

It should be noted that Bob Dylan recorded the Georgia Crackers’ version of Diamond Joe, while musicians Laurie Lewis and Joe Val both learned it from the recording of Ramblin’ Jack Elliott.