Approximately 99.99 % of all banjo players fall squarely in one camp or the other: Clawhammer or bluegrass. It’s kind of like the Hatfields and the McCoys; you’re either with us, or you’re against us. This silly notion has lingered for too long. Let’s do our part in poking holes in this crazy idea by looking at the life of a renowned banjo player who played both styles extremely well: the late Don Stover.

Don grew up in the coalfields of West Virginia, and spent much of his teenage and young adult life working down in the mines. He originally learned to play the old clawhammer style of banjo from his mother, Norma Stover. Don also picked the banjo in the two-finger style that was also popular in West Virginia at that time. In 1945, Don’s ideas about what a banjo should sound like were given a severe jolt the moment he heard Earl Scruggs on the radio. Here’s how Don explained it:

“I believe it was 1945 I first heard Earl Scruggs on the radio…I don’t remember the name of the song. It was his first or second week he was playing with Bill Monroe…sponsored by Flemings and Sons out of Dallas Texas. I didn’t get the song all figured out right at first. Mine wasn’t sounding just like his. The reason was I was using two fingers, and Earl was using three. A while later a traveling salesman came through town who said that Earl was using three metal finger picks on his banjo, wears his picks backwards and upside down. I made some picks out of an old Price Albert Tobacco tin right after the salesman told me. There wasn’t no music stores around where I grew up.” 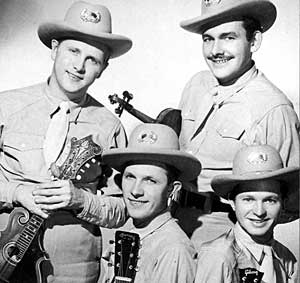 Of course, the lack of local music stores not only hindered Don from using the fancy store-bought fingerpicks, but it also reminds us that there were no banjo instruction books to help him learn. His only option was to listen to Earl on the Grand Ole Opry once a week on Saturday night. After three long years, Don finally figured out how to play like Earl. But unlike many other banjo players, he did not forsake the clawhammer banjo style that he grew up with. Instead, he embraced both.

In 1952, Don joined the Lilly Brothers and moved to Boston, Massachusetts, where they began a tenure playing at The Hillbilly Ranch six nights a week, 52 weeks a year until 1970. In 1957 Don took a leave of absence from the Lilly Brothers to take a job playing with Bill Monroe himself. The classic songs Don recorded with Monroe include A Fallen Star, Four Walls, A Good Woman’s Love, Cry Cry Darlin’, I’m Sittin’ on Top of the World, Out in the Cold World, Roane County Prison, Goodbye Old Pal, In Despair, Molly and Tenbrooks, and Come Back to Me in My Dreams.

Things in Life is Don’s signature song, which he recorded with clawhammer banjo. It’s been covered by the likes of Ricky Skaggs, Tim O’Brien, The Country Gentlemen, Jerry Douglas, Laurie Lewis, and Brooke and Darin Aldridge. Don explained that “one night, just lying in bed, it just came to me, and I got out of bed and wrote it that same night.”

The banjo tab below, is a good example of a very simple melody that sounds great about any way you play it. First off, let me mention that the banjo tab is written out using a slight variation of regular G tuning. For Things in Life, you’ll need to change your 4th string from a D to a C. Just tune down the 4th string, so when you fret it at the 7th fret, it sounds the same as the 3rd string played open, or unfretted. Keep in mind that this was the most common banjo tuning, starting in the 1880s. In fact, it used to be called “standard tuning.” Earl Scruggs used it on Home Sweet Home and Farewell Blues. 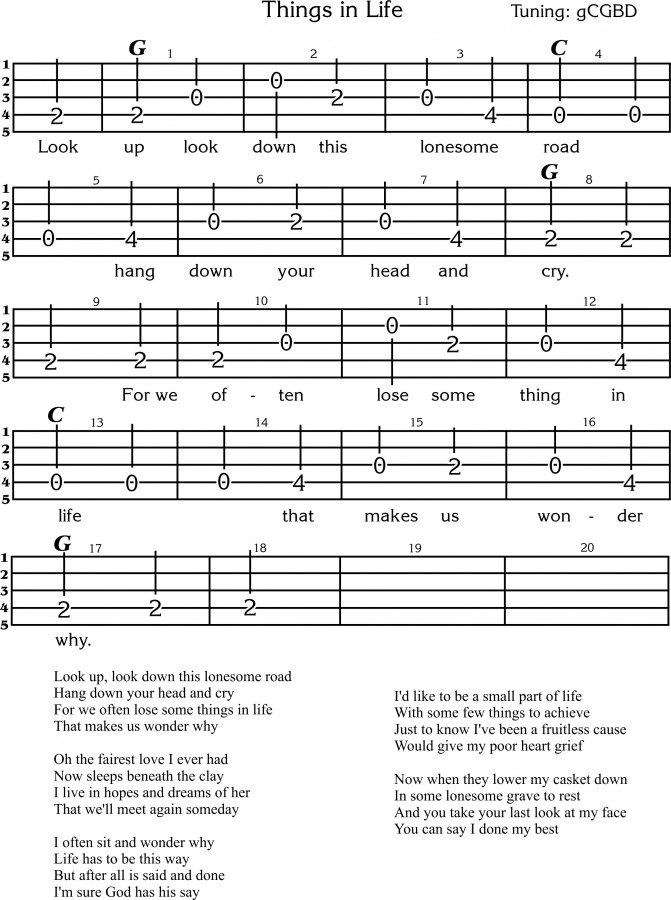 Before you even think about playing Things in Life, you should listen to it. Don recorded it on an album entitled Things in Life, on the Rounder label. You can download it, or here is a link to a YouTube clip of Don playing the song.

The banjo tab I used on Things in Life is actually suitable for playing it either in clawhammer style or bluegrass banjo style. I have written down only the bare-bones melody. Once you’re comfortable playing the melody, you should be able to play it using either style you’re used to playing

Clawhammer Banjo: If you’re an old-time or clawhammer player, you know that your basic stroke is “claw-ham-mer, claw-ham-mer.” Normally, the “claw” is the melody note. The numbers you see on the lines of the tab are your “claw.” On the notes where the melody note is on the 4th string at the 4th fret, you’ll find that it’s difficult to play that note and also hold down a C chord at the same time. In this case, I would just do my claw-ham-mer on the open strings and not worry about the playing a chord.

Slides: One ornament you can play to make the song sound a little fancier is a slide. When you get to the 4th string, 4th fret notes, merely fret the 4th string at the 2nd fret and slide up to the 4th fret. That will sound really good when you get it.

Key: Things in Life has been recorded in a variety of keys. Don Stover in B, Ricky Skaggs in C, Brooke Aldridge in G, Jerry Douglas in  C, and the Country Gentlemen in A.

8 Responses to “Bluegrass vs Clawhammer Banjo + ‘Things in Life’ Tab”