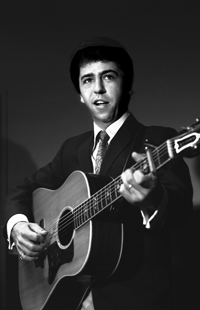 In the early sixties I lived within earshot of the Ash Grove, a legendary folk club on Melrose Avenue in West Hollywood. As I recall, Monday night was called “hoot night,” and the house band was “The Country Boys.” When I first heard the band in mid-1962, it consisted of Clarence White on guitar, Billy Ray Lathum on banjo, LeRoy Mack on Dobro, and playing bass was Roger Bush.

In the fall of 1962 the band got the opportunity to record their first album for Briar International. At that time the founder of the band, Roland White, was in the army, so he did not appear on the album. The producers of the record were none other than Merle Travis and Joe Maphis. Merle suggested that the name of the band was too generic, and someone pointed out that Mac Wiseman was calling his band The Country Boys. Since Merle was from Kentucky, he suggested the band change their name to the Kentucky Colonels. Late that fall, I was in the audience and I could clearly see the band’s excitement when they proudly showed off their new record from the stage of the Ash Grove. It was called The New Sounds of Bluegrass America, and blazoned across the front cover was the band’s new name, The Kentucky Colonels.

During this period, I was trying to learn the guitar. I was struck like a bolt of lightning as I watched the Clarence White perform with the band. The syncopated timing of his guitar breaks, as well as his smooth rhythm playing, was unlike anything I had ever heard. At the time, I had no idea just how unique and innovative he was. I only knew that he knocked my socks off. The next year, I was lucky enough to be at the guitar workshop he taught at the 1963 UCLA Folk Festival. During the workshop, someone raised their hand and asked Clarence where he learned his stuff. He shyly responded that two of his big influences were sitting next to him on stage, Joe Maphis and Doc Watson.

Clarence’s association with Joe Maphis went back to 1955. The year before, the White family formed a band called The Three Little Country Boys. Clarence was on guitar, Roland on mandolin, and Eric Jr. was on tenor banjo. Their sister Joanne played the bass and their father, Eric Sr., occasionally joined them on harmonica. By the next year, Joanne had dropped out and Eric Jr. took over the bass duties.

Things started to come together for the band when they entered and won a talent contest sponsored by radio KXLA broadcasting from Pasadena. The show was the brainchild of a country radio personality named Carl Deacon Moore, who called himself the Squeakin’ Deacon. I’ll never forget one time I was listening to his show and the Squeakin’ Deacon told his radio audience that bluegrass music was “as good as home cookin’ and short sleeve-eatin’.” As a prize for winning the talent contest, The Three Little Country Boys got to appear as guests on a local TV show called “Ralph T. Hicks’ County Barn Dance Jubilee.”

More than anything else, the performance on the Jubilee jump-started the career of The Country Boys, as the band was now calling itself. Appearances on several Southern California country radio shows followed, and they soon were noticed by Joe Maphis, who called himself “King of the Strings.” Joe later went on to write “Dim Lights, Thick Smoke, and Loud, Loud Music” that was covered by Flatt and Scruggs and many others. Joe was a popular country music star who often performed with his wife Rose Lee and with Katie Warren, who billed herself as Fiddlin’ Kate. Joe’s trademark was his double-neck electric guitar. Joe took Clarence under his wing and demonstrated to Clarence how the guitar could be a powerful lead instrument.

In 1963 The Kentucky Colonels played in Berkeley, California, at a folk club called the Cabale Creamery on San Pablo Avenue. While in Berkeley, the band visited with Sandy Rothman, who had earlier played guitar in Bill Monroe’s band, The Bluegrass Boys. Rothman introduced Clarence and Roland White to Campbell Coe, the owner of a music store called Campus Music that was situated a block from the UC-Berkeley campus. Coe was an outstanding and versatile guitar player who played both country and swing, and who led a band called The Country Cousins. Coe was adept at the music of Django Reinhardt and exposed both Clarence and Roland to Reinhardt’s music via his collection of 78 rpm records. Coe gave the White brothers a reel-to-reel tape of Django Reinhardt who recorded with Stephan Grappelli and the Hot Club of Paris. When they returned to Southern California, Clarence mentioned to Joe Maphis that he had discovered the music of Django Reinhardt. Joe readily admitted that he had learned many of his hot licks by listening to Django Reinhardt’s 78 prm records.

Just as Clarence was soaking in the influences of Joe Maphis and Django Reinhardt, he was profoundly affected by the music of Doc Watson. In 1962 Doc made an appearance at the Ash Grove as part of an old-time band that consisted of Clarence “Tom” Ashley on clawhammer banjo, Clint Howard on rhythm guitar, Fred Price on fiddle, and Doc on lead and rhythm guitar. Shortly after they played to a full house at the Ash Grove, the band was supposed to come back several months later, but they cancelled that date. It might have had something to do with the fact that Ashley refused to travel by airplane. With some hesitation, Doc reluctantly agreed to do a solo set at the Ash Grove, where he was greeted with unanimous approval. This performance helped launch Doc’s solo career. On subsequent visits Doc made to the Ash Grove, Clarence was able to absorb more of Doc’s amazing guitar playing. In particular, he was inspired by Doc’s ability to play fiddle tunes like “Black Mountain Rag,” “Soldier’s Joy,” and “Beaumont Rag” on the guitar.

During this time, Clarence’s brother, Roland, was in the army, so Clarence started to play more lead guitar breaks with the Kentucky Colonels. In September of 1963, Roland rejoined the Kentucky Colonels after 17 months in the service. As the older brother, Roland re-assumed the leadership role of the band. During this time Roland told me that they held rigorous rehearsals late into the night. He said that they liked to practice into the wee hours when they were already bone-tired so that “we could give it all we had.” Rehearsing long hours paid off. Each week when they performed at the Ash Grove or served as the house band for hoot night, the band seemed to get tighter and tighter. I think that Roland brought some of the “spit and polish” attitude of the Army to the band, and it paid off in spades!

Listening to Clarence play with the Colonels each week was like going to guitar college for a lot of us in the audience. There’s no telling how many budding guitarists like myself were profoundly affected by watching and listening to this band, and especially hearing Clarence on guitar. It’s certain that Joe Maphis, Doc Watson, and Django Reinhardt were Clarence’s inspiration, but it was Clarence himself who forever changed the role of the guitar in bluegrass music in California and beyond.