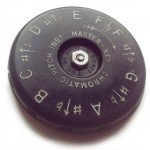 Over the years, there’s been a dizzying array of gizmos created to help us find the right pitch for singing or to help us tune our instruments. The first one I remember was a round pitchpipe the music teacher in my elementary school used when we would sing in class.

When I first started playing the guitar in the early 1960s, it was common to use a tuning fork. Since that time I’ve heard that tuning forks have been produced in different sizes and pitches, but my only experience was with an “A” tuning fork. I would bang it on my knee (ouch!) and then hold it up to my ear to hear the pitch. Sometimes, after I hit it on my knee, I would hold  it on one of the end pins of the guitar, which would make it louder. 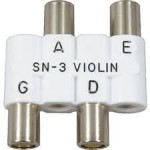 Then I heard about pitch pipes that you could blow, which would give the proper pitch. These came in a variety of sizes, shapes and colors. To my dismay, I discovered that the pitch changed, depending on how hard you blew on it. Hmmmmm. That dampened my enthusiasm for pitch pipes.

Sometime in the seventies, people started using electronic tuners, which was a major improvement. The first one I had was big and clunky, but worked fine until I forgot to turn it off, and the battery ran out of juice. Later on I invested in a Korg tuner, which worked pretty well except for one thing. The “off” and “on” button was right next to the button where you could change the pitch. Sometime my fat finger would accidentally push the pitch button by mistake, (especially in the dark) which explained why I was sometimes tuned higher or lower than everyone else. Bad design! 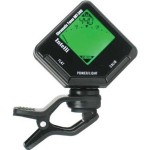 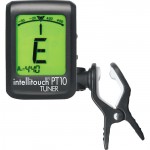 The greatest advance in tuners came when they started to be available with a grabber that you could clamp on the peghead of your instrument. Sometimes I find these handy, except that they often break at the weak point where they swivel.

For those who like to use free online software, there are numerous on-line tuners which will play various notes for you. You can do an on-line search to find bunches of them.

With the arrival of iPhone apps, I tried various free tuning apps, but several of the ones I tried were a nightmare. I finally stumbled on Cleartune, an iPhone app that is amazingly accurate. This is the tuner I’m currently using, until something better comes along. The only problem with Cleartune is that it’s so accurate, that I rarely feel like I’ve got my instrument in tune. It seems to keep telling me “no.. a little higher” or “a little lower.” I guess that’s better than the tuners that light up with you’re supposedly in tune, but are really not. I have found that those kind of tuners have very low standards. If I even get a string barely in tune, it often lights up, as if to say, “Yeah, that’s probably close enough for the way you play.”

The strangest tuner I can think of is a tuner that doubles as an endpin on the fiddle or violin. You simply blow it and it gives you sort of an A. These are fairly rare, but it’s always fun to find them on old fiddles. One time, I remember examining one of my student’s fiddles and noticed it had one of the end pins with a tuner. I asked my student if they knew what that was, and of course, they didn’t. When I raised it up to my lips and blew it, they were so surprised, they about did a somersault.