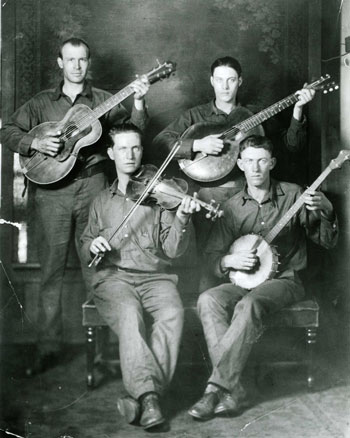 Not long ago, two men from West Virginia — both fine guitarists — were enjoying a visit to Nashville. During part of their stay, they browsed some of the big record stores in Music City, marveling at the wealth of country music LP’s, CD’s, and cassettes offered for sale — recordings that they could never find in the stores back home.

Robert Shafer, a national champion flatpicker from Elkview, casually picked up a release of vintage old-time music. On the back of the jacket, he was surprised to find listed a selection by a group called the West Virginia Coon Hunters. He called to his friend, Darel Meadows, currently a resident of Roanoke, Lewis County. Darel’s father, Clyde S. Meadows, was a talented guitarist and singer who had been a member of the West Virginia Coon Hunters from the late 1920’s until the 1940’s. Clyde Meadows passed away in 1969. Darel recalls hearing stories from his father about traveling and playing with the band, but Darel had no idea that any recordings existed of the group.

More surprising to Darel was the fact that this rare recording of his father’s music was originally made during what was perhaps the most significant country music recording event of all time — the famed Bristol sessions. Considered by some to mark the beginning of the modern country music recording industry, the Bristol sessions took place July 25 until August 5, 1927, in the mountain city of Bristol, straddling the Virginia and Tennessee state border. These sessions were conducted by Ralph Peer for the Victor Talking Machine Company and resulted in the discovery of several important artists, including Jimmie Rodgers (often called the “Father of Country Music”), the original Carter Family (often referred to as the “First Family of Country Music”), and others. The fact that Darel’s father had participated in this seminal event was exciting news to Darel.

The news was tempered, however, by Darel’s discovery that his father’s name was incorrectly listed on the recording as “W.A. Meadows.” Darel was disappointed by this error and determined to set the record straight. In the process, he began a challenging — often frustrating — hunt for additional information and documentation about this nearly forgotten West Virginia string band.

The reissued recordings of the West Virginia Coon Hunters’ sides from Bristol list the band personnel as “W.B. Boyles, fiddle; W.A. Meadows, comments; other musicians undetermined.” Victor released two lively numbers from the group — “Greasy String” and “Your Blue Eyes Run Me Crazy.” The fiddling is clear, unadorned, and forthright on both numbers. Meadows’ “comments” on “Greasy String” take the form of sparse interjections, in a spoken style commonly heard on string band recordings of the day. On “Your Blue Eyes Run Me Crazy,” however, Meadows shows himself to be a strong and accomplished singer. The song is a variant of the traditional number also known as “Fly Around My Pretty Little Miss,” “Western Country,” “Susananna Gal,” “Blue-Eyed Gal,” and by other names.

Darel can pick out his father’s voice in the recordings. “I heard him sing for years, and I’d recognize it anywhere,” he says. Determining the presence and the identity of the remaining musicians, however, is a bit trickier. Darel has several aging, but clear, promotional photographs of the group taken October 14, 1927. In one photograph — the only one specifically labeled as the West Virginia Coon Hunters — there are a total of nine musicians. The young men in the photograph are dressed alike in clean, but plain, work clothes. They are all well-groomed, and each player is holding what appears to be a high-quality musical instrument. Included are three guitars, two fiddles, a mandolin, a banjo-mandolin, a tenor banjo, and a five-string banjo. The other photographs in the collection, apparently taken on the same day, show the same musicians in a variety of smaller groupings.

Notes on the backs of the photographs, in Clyde Meadows’ handwriting, provide the names of the musicians. Fiddler W.A. “Bone” Broyles appears in a number of the photographs, as does guitarist Clyde S. Meadows. The other fiddler shown is Fred Pendleton. The two additional guitarists are identified as Fred Belcher and Jim Brown. The mandolinist is identified as Vernal Vest; the banjo-mandolin is played by Regal Mooney, tenor banjo by Dutch Stewart, and five-string banjo by Joe Stephens, according to the notes.

The group is listed as being from Bluefield, the home of Clyde Meadows. Fred Pendleton was well-known as a fiddler in nearby Princeton for many years. Darel has had little success in establishing the personal histories of the other musicians, but it is likely that the majority of the remaining band members lived in the Bluefield vicinity during the late 1920’s, on one side or the other of the Virginia and West Virginia state line.

It is matter of speculation as to exactly how the West Virginia Coon Hunters found themselves in Bristol on August 5, 1927 — the final day of the famed session. It is interesting to note, however, that Blind Alfred Reed, also from Princeton and the only other West VirginiaBristol sessions, made his Bristol recordings earlier in the session — on July 28. [See “The Life of Blind Alfred Reed,” by the Rounder Collective; January-March 1976.] Fiddler Fred Pendleton was well-acquainted with Alfred Reed and Reed’s son Arville, and actually did some recording with the pair as the West Virginia Night Owls for Victor later in 1927. It is quite possible that the Coon Hunters undertook the journey to Bristol after hearing positive reports from Blind Alfred Reed, though it is unclear why they took the trip without fiddler Pendleton. Ironically, Fred Pendleton was personally invited by Ralph Peer to come to Bristol for a follow-up session the next year. On November 3, 1928, Fred Pendleton recorded two sides for Victor with guitarist Clyde Meadows in Bristol — “The Last Farewell” and “The Young Rambler.”

Other details of the West Virginia Coon Hunters’ brief 1927 recording career are equally sketchy. Although it is difficult to tell exactly how many instruments contributed to the group’s driving rhythm, careful listening suggests that considerably fewer than the full group of nine musicians were involved in making these recordings. Who, then, did Ralph Peer record in Bristol as the West Virginia Coon Hunters?

Darel feels certain that his father played the guitar on the recordings in addition to singing and adding “comments.” The recording of the song “Your Blue Eyes Run Me Crazy” features five-string banjo played in a clawhammer style. This fact, along with photographic evidence, suggests that Joe Stephens made the trip to Bristol, since he is the only member of the group shown with a five-string banjo in any of the pictures.

The recording of the tune “Greasy String,” however, does not include a five-string banjo, but features at least one guitar and one or more strummed rhythm instruments. One of these instruments appears to have been a ukelele.

A particular photograph from Darel Meadows’ collection stands out as a possible portrait of the portion of the group that might have recorded in Bristol, 75 years ago. The photograph shows Bone Broyles on fiddle, Joe Stephens on banjo, and Fred Belcher and Clyde Meadows on guitars.

A recently published discography of Fred Pendleton’s recordings reveals that a “L. Vernal Vest” played ukelele in Pendleton’s West Virginia Melody Boys during the early 1930’s. It is likely that this is the same Vernal Vest shown with a mandolin in the Coon Hunters’ 1927 photographs, and that Vest also made the trip to Bristol and recorded at least one song with the group, playing the ukelele.

Clear as mud? Perhaps, but at least we are now able to put a few possible names and faces to these historic recordings. And, much to Darel Meadows’ satisfaction, we are finally able to set the record straight regarding his father’s correct name and Clyde S. Meadows’ small, but very real, contribution to the recorded history of old-time country music.