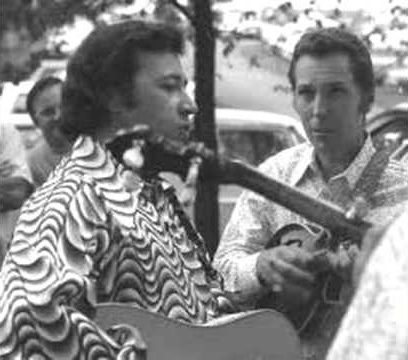 The first bluegrass band to record Fox on the Run was Cliff Waldren and the New Shades of Grass. Listening to this bluegrass recording, a lot of people were puzzled by one line of the lyrics that sounded like Cliff was singing “I fillustrate a girl.” Of course, nobody had a clue what Cliff was singing about.

Relief came in 1970, when Fox on the Run was recorded by the Country Gentlemen. Their lead singer, Charlie Waller, clearly sang “I see a string of girls,” which made a lot more sense than “I fillustrate” a girl, so that’s how most bluegrass bands sang it.

About 20 years ago I received am email message from Cliff Waldren, who contacted me about playing his new CD on my “Country Roots” bluegrass radio show. Armed with Cliff’s email address, I seized the opportunity to get to the bottom of the “fillustrate a girl” question that had been bugging me for years. Here’s what I wrote to Cliff:

Hi Cliff: While I’ve got you on the line, I have a question that’s been burning a hole in my mind for almost 30 years. On the second line of the 2nd verse of your early recording of Fox on the Run, you seem to be singing “I fillustrate a girl.” What, pray tell, are you singing?

Hi Wayne,
Regarding your question about THE FOX! My partner in music at that time Bill Emerson gave me the words to Fox on the Run. You heard right that is what I’m saying. I wanted to change that part of the song because it didn’t make any sense to me. So later, after Bill went with the Country Gent’s I started saying “I see a string of girls,” and that’s what Charlie Waller is saying in their version.

It was very hard to understand what Manfred Mann was saying on the original recording. But, several years later a good friend of mine told me the correct words was “I illustrate a girl.” Believe me, that has haunted me for the past 30 some years. I wish there was some way I could fix it but, I can’t so, I’ll just have to live with it.

I’ll have to say, I learned a good lesson since then I’ve tried to make sure the words are right and I try and say them where folks can understand what I’m saying.
Take care,
Cliff

With some digging, I found Tony Hazzard’s original lyrics. Note: The verse with the asterisk was written by Tony much later than the original lyrics that were recorded by Manfred Mann.

Fox on the Run

Now everybody knows the reason for The Fall,
When woman tempted man in Paradise’s hall.
This woman, she tempted me and she took me for a ride,
And, like the weary fox, I need a place to hide.

She walked through the corn leading down to the river,
Her hair shone like gold in the hot morning sun.
She took all the love that a poor man could give her
And left him to die like a fox on the run.

*It was many years ago, but it feels like yesterday,
When she led me through the corn on that fateful summer day.
I saw the sunlight in her hair; I saw the promise in her eyes;
And I didn’t even care that her words of love were lies.

Come raise your glass of wine and fortify your soul;
We’ll talk about the world and the friends we used to know.
I’ll illustrate a girl who wandered through my past.
She didn’t care to stay; the picture cannot last.

Wayne Erbsen is a native Californian who has made his home in western North Carolina since 1972. A musician and teacher, Wayne has written and published over thirty bluegrass music instruction books and songbooks for banjo, mandolin, fiddle and guitar.