One of the most fascinating of all the two finger pickers is a gentleman by the name of Walter Davis. Residing in Black Mountain, North Carolina, Walter, in his 75 years, has come to know most of the western Carolina banjo players such as Samantha Bumgarner, Mack Crow, Clarence Ashley and Dock Walsh. He was also acquainted with Jimmy Rodgers, who once lived in Old Fort, North Carolina, and Blind Lemon Jefferson, who played on the streets of nearby Johnson City, Tennessee. He also knew Jimmy Davis, who came to visit his mother in a hospital in Morganton, North Carolina,

Among the favorite pastimes in the mountains was music. They say fiddlers and banjo players were so numerous they practically fell out of the trees when it rained. Although banjos and fiddles were common, it is said that guitars were a rare and precious commodity in the early days. Anyone who could play one was awarded the respect due only to a preacher or a moonshiner.

Accordingly, it was a special day in the Shelton household when Charlie Pack came to visit. Charlie always brought with him a black Stella guitar. In the evenings, Charlie would chord the Stella and 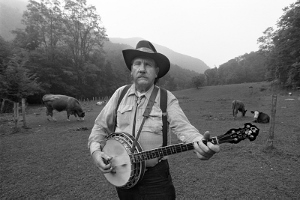 Published in Bluegrass Unlimited in March 1982

They call him “The Old Man of the Mountains.” At the spry age of 42, that makes Raymond Fairchild a rather youthful “old man.” No matter. The mountains can age you before your time, and Raymond has lived far enough back in the Smoky Mountains to be several generations old by now. This man, who many consider to be the fastest and the best banjo player alive, lays a genuine claim to playing mountain music. He’s lived it.

Born near Cherokee, North Carolina, to a Cherokee Indian mother and a

It all started with mama. It seemed like she could make music on about anything with strings on it and some things that didn’t, like the french harp. There never was enough time for mama to play, what with raising six rambunctious sons. But often on Saturday night she would put her work aside and get together with her two brothers, Rome and Joe, to make music. Joe played banjo in the old clawhammer style, and Rome played the fiddle. In addition to the hoedown square dance tunes, Rome was known to have played some beautiful waltz music on the

In the Summer of 1949 a shy boy of eighteen rode up to Bristol, Virginia for his first professional job as a fiddle player. Behind the steering wheel was a man in his early twenties who had encouraged the boy’s music from the start. The older man’s name was George Shuffler.

“This is a good break for you,” George said to the younger man riding beside him. “The Stanley’s are tough, and what with making a guaranteed $50 a week, why you could send some home to the folks and still have more money than you would have ever made

It’s a long drive from Raleigh, North Carolina to Nashville, Tennessee. Before Interstate 40 was cut through North Carolina, driving west from Raleigh meant winding through such towns as Siler City, Mocksville, Statesville, Hickory, and Old Fort. Bill Monroe is no stranger to that road. In the forty odd years he has been performing, he has worn out many a set of tires driving that road. Being a bluegrass musician has meant accepting show dates spread out all over the country; it never seems to matter how many miles lie between.

To pass the time, Monroe has often tuned in

On March 9, 1919, a doctor rode his horse-drawn buggy through the hills of northwest Georgia to the home of Ben and Effie Davis. He was summoned because Effie was about to have a baby. By the time the Doc had left, Effie and John were the proud parents of a healthy baby boy. As yet, they had no name for him. By and by, they gave him the name Cleo.

As young Cleo was growing up, he was surrounded by music. Mama played the pump organ and sang the old hymns along with her brothers and

Bluegrass music evolved from an earlier type of country music we now call old-time music. As it’s commonly played, old-time music is a mostly instrumental stringband style with a beat that’s designed for square dancing. As such, the music is spirited and upbeat.

Western North Carolina has long been fertile ground for the growth of bluegrass music. In fact, no other region or state has contributed so much to its development.

For many people, the appeal of bluegrass music is that it is a relatively new form of music that sounds old. Most scholars agree that bluegrass first gained national attention when Bill Monroe and the Bluegrass Boys appeared on the Grand Ole Opry in 1945. In addition to Bill Monroe himself, this legendary band consisted of Lester Flatt (guitar), Earl Scruggs (banjo), Chubby Wise (fiddle) and Cedric Rainwater (bass). The reason that