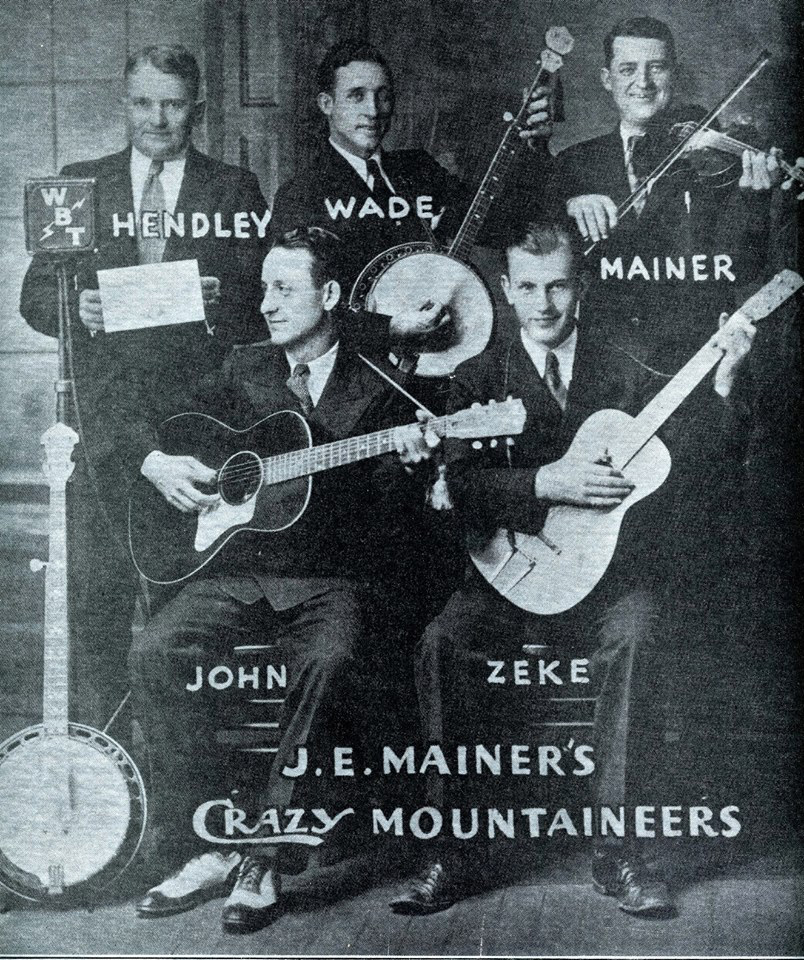 Among the more bizarre songs in old-time and early country music is one called Run Mountain. The song is curious both for the melody and because some of the lyrics are rather mysterious. The melody is set in the key of G but it starts in the key of A. By the time the chorus comes around, it is in the key of G. Are you confused yet? If so, join the club!  As if the melody and the key changes are not strange enough, what really takes the cake are the words to the chorus. More on this later.

Run Mountain seems to have originated with the North Carolina fiddler J.E. Mainer, who recorded it several times starting as early as 1949. J.E. most recently recorded it on April 7, 1963, for Arhoolie Records. Introducing the song, J.E. said, “Well, friends, here comes an old number called Run Mountain, Shake a Little Hill. So are we to believe it is an old song or a new one?

The answer seems to be “both.” The melody is unlike anything else in the old-time repertoire, so it should be called “new.” At least one of the verses (“If I had a needle and threat”) is common in any number of songs. The rest of the verses seem to be J.E. Mainer originals. The main thing that’s so bizarre about the song is the chorus:

About twenty years ago I had the pleasure of being at an old-time music camp in Tennessee where Wade Mainer, J.E.’s younger brother, was visiting. I managed to sit across the table from Wade at lunch one day, and grabbed  the opportunity to ask him exactly what his brother was singing on the chorus of Run Mountain. Looking exasperated, Wade confessed that he didn’t know what in the world J.E was singing about. I found out that when Wade recorded it after his brother did, he sang “run mountain, sugar in the hill.” Without getting clarity on the meaning of the chorus from Wade, the mystery very much remains intact.

Putting Run Mountain to the side for a moment, J.E. Mainer should be remembered not so much for this crazy song, but for being in the group that basically invented bluegrass music. Whoa Nelly! Did I really mean what I just said? YES! Am I claiming that someone besides Bill Monroe invented bluegrass music? Yes I am. Hear me out. If you don’t believe me when I’m finished explaining this, I’ll go slither under the rock I crawled out of.

J.E. (Joseph Emmett) Mainer (1889-1971) was born in a one-room log cabin near Asheville, North Carolina. Like must rustic cabins in that area, it had no electricity or running water. He remembered taking his Saturday night bath in a galvanized tub. At the age of nine, J.E. began playing the banjo with the help of his older brother-in-law Roscoe Banks. Banks played fiddle left handed, and even as a lad, J.E accompanied him on the banjo. Before long, J.E. took up the fiddle and eventually became known as a skilled but rough and ready hoedown fiddler who seemed to follow in the footsteps of both Gid Tanner  and Fiddlin’ John Carson.

When J.E. was only 12, he went with his father W.J. (William Joseph) Mainer (1850-1947) to live in Glendale, South Carolina, where the boy worked in a cotton mill long before child labor laws were even seriously considered. Eventually, J.E. moved to Concord, North Carolina, to work in a larger cotton mill. He remembered earning about $5.50 a week, but his board was $1.75 a week. In 1923, J.E.’s little brother Wade moved to Concord and got a job in the same mill where J.E. worked. Wade remembered that “we would play music in our spare time, for parties, corn shucking, lassy pullings (molasses making), bean stringings, and fiddlers conventions.” In 1932 the brothers formed a band with Howard and Lester Lay, who both played guitar. They were soon playing on radio WSOC in Gastonia, North Carolina.

In 1934, the banjo player Fisher Hendley encouraged the pair of brothers to audition for J.W. Fincher’s Crazy Barn Dance radio show that was broadcast on WBT in Charlotte, North Carolina. WBT beamed a strong signal to much of western North Carolina. Sponsoring the show was Crazy Water Crystals, a compound that promised relief for constipation. Fincher was delighted with the sound of the group and named the band “The Crazy Mountaineers.” This powerhouse radio show had the financial moxie to ensure that the Mainer brothers could leave the security of working at the mill and become professional musicians.

The Crazy Mountaineers consisted of J.E. on fiddle, Wade on banjo, Claude Edward “Zeke” Morris on guitar, and Daddy John Love on guitar. In 1935, Boyden Carpenter replaced Love. In addition to the Saturday night Crazy Barn Dance, The Mountaineers also played early morning radio shows on WBT. This widespread radio exposure ensured that they played to capacity crowds who filled up rural Grange Halls and schoolhouses. Admission was normally 15 to 25 cents. The band moved briefly to WWL in New Orleans and then to WPTF in Raleigh, NC. In 1937, Wade and Zeke Morris had a bitter dispute over money with J.W. Fincher, and they left and formed the band known as “Buck and Buddy, the Little Smilin’ Rangers.”

What is unique about J.E. Mainer’s Mountaineers has little to do with the song Run Mountain. Instead, it is important to recognize that it was this band that captured the original sound of bluegrass music with their earliest recordings in 1935. Listen, for example, to the Mountaineers do Lights in the Valley in this track from the Internet Archive. If you do, you’ll hear what sounds like a traditional bluegrass gospel quartet with 2 finger banjo, fiddle, and two guitars. The 1935 date is important to keep in mind, because this was 10 years before Bill Monroe and the Bluegrass Boys made their historic performances on the Grand Ole Opry or their legendary recordings.

Wade Mainer once confided to me that he felt like they were playing bluegrass music but didn’t know it. Zeke Morris once told me that “I seriously believe that without us, I don’t think bluegrass music would exist at all.”

I rest my case.

Went up on the mountain,
Give my horn a blow.
I thought I heard my true love say,
“That’s comin’ from my beau.”

Went up on the mountain,
Get me a load of pine
Put it on the wagon,
I broke down behind.

Me in the field hard at work,
I set down to play
While thinkin’ of my own true love,
She’s many miles away.

Me six miles from my home,
Chicken’s crow ‘for day,
Me upstairs with another man’s wife,
Better be getting’ away.

If I had a needle and thread,
As fine as I could sew
I’d sew my true love to my back
And down the road I’d go.

Me in the field hard at work,
I set down to play.
Me running around with another man’s wife,
Better be gettin’ away.