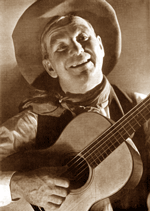 Let’s take a look at one of the most notable labor songs of all time, Hallelujah I’m a Bum, and the man who wrote it,” Harry McClintock, whose nickname was Haywire Mac.

Mac’s life reads like the pages of a dime novel. Born October 8, 1882, he ran away from home when he was still a boy and joined the circus. Yielding to his itch to roam, he worked as a railroad man in Africa, a seaman, and a muleskinner in the Philippines. In 1899 he worked in China assisting a newsman reporting on the Boxer Rebellion. Landing back in the States, he railroaded, became a cowboy, a drifter, a journalist, a recording artist, a playwright, and sang on street corners with his guitar as he bummed his way around the country. He later wrote that “anyone who can sing never has to go hungry.”

Sometime after 1905, McClintock joined the I.W.W., which was short for the Industrial Workers of the World, better known as the “Wobblies.” McClintock was said to be the first singer to publicly perform Joe Hill’s song Preacher and a Slave. He later appeared in a number of “B” westerns, mainly as a villain, and had his own radio show. Along the way, he took pieces of earlier hobo songs and composed Big Rock Candy Mountain, which eventually became a hit on the soundtrack of the Coen Brothers film, O Brother, Where Art Thou.

According to Mac, in about 1897 he composed the lyrics of a song he called, Hallelujah on the Bum, which he set to the tune of an old hymn, Hallelujah, Thine the Glory, which is sometimes referred to as Revive Us Again. Mac learned the hymn as a boy, singing in the choir of the church of his hometown of Knoxville, Tennessee. The song fit McClintock to a T, because he could frequently be found bumming around the country. It became a favorite of the hobos and was frequently sung in hobo camps, or “jungles,” as they were sometimes called.  Mac later fought in the Spanish-American War,  and where he taught many of his fellow soldiers to sing Hallelujah, I’m a Bum.

In 1908, Hallelujah, I’m a Bum was printed in the I.W.W. Industrial Union Bulletin, which sold for 10 cents. It’s sometimes called The Bum Song.

Oh, why don’t you work
Like other men do?
How in the hell can I work
When there’s no work to do?

Oh, why don’t you save
All the money you earn?
If I did not eat
I’d have money to burn. (Chorus)

Oh, I like boss
He’s a good friend of mine;
That’s why I am starving
Out on the bread line. (Chorus)

Whenever I get
All the money I earn,
The boss will be broke,
And to work he must turn. (Chorus)