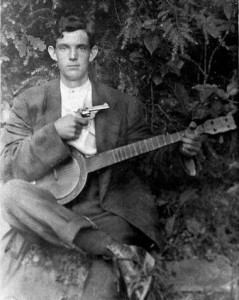 As you might guess, there are numerous differences between old-time and bluegrass music, although they share a lot of similarities too. In old-time music, the banjo, fiddle, and mandolin generally play the melody all at the same time. During an old-time tune, the guitar generally refrains from playing the melody and concentrates on providing the rhythm and an occasional bass run. In bluegrass music, on the other hand, only one instrument plays the melody at a time. Everyone else plays backup. So let’s explore what playing backup means in bluegrass music.

First off, it’s good to remember that the only difference between music and noise is that music has rhythm and noise doesn’t. In bluegrass music, the most common rhythm is a one-two beat. Drawing on its African-American roots, the “two” is heavily accented, so the bluegrass rhythm is really more like “one-TWO, one-TWO.” Let’s try it.

When you get that, keep tapping your foot, but this time only say “TWO” when your foot comes up. The result will be “tap-TWO, tap-TWO.” The “TWO” is the beat that is accented in bluegrass music. That’s what we’re going to concentrate on when we play bluegrass backup. 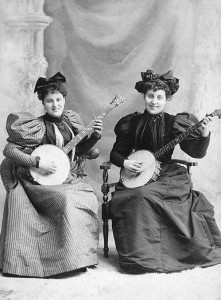 E. If you’re a novice fiddle player, playing back-up on the “two” is a piece of cake. You’re going to do what’s commonly called “chopping,” a term that’s purloined from mandolin players. Start off by holding the fingers of your left hand on the strings, so that you’re muting the sound. With your bow, you’re going to strike the strings with the horsehair that’s nearest the frog with a short downward stroke. This will produce a sudden percussive sound that will nicely accent the beat. Remember to play the stroke only on the “two.” Because the sound that’s produced sounds to me like the quacking of a duck, I call this stroke “The Quack.”

MANDOLIN. You mandolin players will also play only on the “TWO” for your back-up. Simply hold down a chord and strike the strings with your pick in a downward direction. If you like, you can ignore the chords and hold the fingers of your left hand softly on the strings so as to mute them. Whether you’re chording or muting the strings, mandolin players call this motion “The Chop.”

BANJO. Most banjo players have a variety of back-up licks up their sleeve. Let’s go over two of them. For now, the fingers of your left hand can merely mute the strings so that you don’t have to be concerned with the chords. 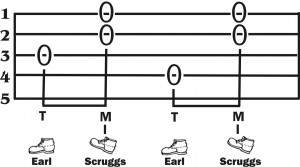 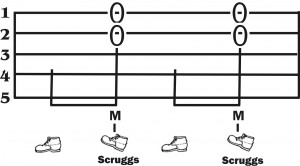 In addition to playing “Earl Scruggs, Earl Scruggs,” you can also just play what I call “Scruggs.” Here’s how to do it. Hit the 3rd string with your thumb at the same time you pluck up on the 2nd string with your index finger and the 1st string with your middle finger. The trick is that you’ll do this plucking motion only on the TWO. Let’s try it. Tap your foot. When your foot hits the floor, say out loud “one,” and when it comes up say “TWO.” Continue tapping your foot but only say “TWO.” So it’s “tap-TWO, tap-TWO.” You’ll play the “Scruggs” only on the TWO.

So there you have it, friends. You fiddle, mandolin and banjo players are now equipped with the most fundamental techniques that will support the music, help keep the beat, and provide essential backup without dimming the lights of the other musicians who are trying to shine.