I remember back In the seventies and eighties, it was neigh on impossible to do a bluegrass show without performing “Take Me Home, Country Roads,” better known as just “Country Roads.” The audience would practically take us out to the nearest tree and hang us by our toes if we didn’t play it. And when we finally did play it, the audience would sing along, swaying back and forth and having a genuine feel-good “Kumbaya moment.” 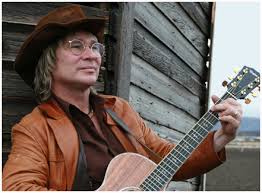 “Country Roads” was actually written by Bill Danoff, Taffy Nivert and John Denver, who was the first to record it in 1971. It became a world-wide hit, and one of Denver’s signature songs. I always assumed that the composers had got their geography wrong in the song when they wrote “Almost Heaven, West Virginia; Blue Ridge Mountains, Shenandoah River.” I figured that the Blueridge Mountains were only in North Carolina and that the Shenandhoah River only flowed in Virginia.

However, my good friend John Lilly, editor of Goldenseal Magazine (the state magazine of West Virginia) set the record straight by pointing out that “the Blue Ridge Mountains form the border between Jefferson County, West Virginia, and Loudoun County, Virginia, for approximately 15 miles; the Shenandoah River flows north-northeast through about 18 miles of West Virginia enroute to its confluence with the Potomac at Harper’s Ferry.”

Let’s learn to pick a simple version of “Country Roads” on the banjo.

If you’re new to my way of writing tab, let me point out that the five horizontal lines represent the strings, which are numbered on the left. Of course, your short string is the 5th string. The numbers on the strings tell you what fret to play on the string.

Instead of writing out a complicated banjo arrangement with all the rolls incorporated into the song, I only write out the bare-bones skeleton of the tune. That way, we can “dress” the skeleton with different rolls each time we play it. That means we’ll be improvising and our music still stay new and fresh instead of old and stale. 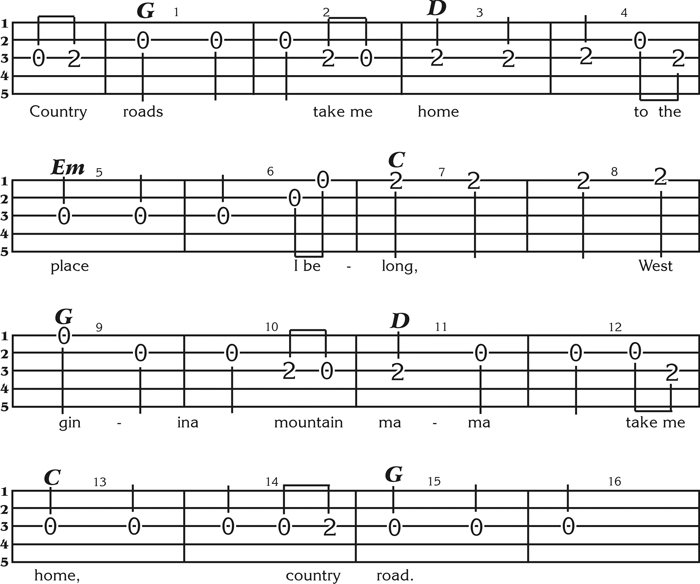 In my way of writing out tab, there’s only two kinds of notes. At the very beginning of line one, you’ll see two notes that are tied together with little lines. These are eighth notes. Everything else is a single note with a vertical stem either pointing up, or hanging down. It doesn’t matter which way the stem points. These notes are quarter notes, and get one beat each. You can decorate those quarter notes with a simple roll that gets one beat. (A beat gets one complete foot tap where your foot goes down and then up).

On any of the quarter notes, let’s throw in a simple roll I named the “Lester Flatt roll.” I call it that because it has the rhythm of the words “Les-ter Flatt.”

On the notes that are tied together, just play those notes with no roll.

The only time where you can’t play the Lester Flatt roll is when the melody goes up to the 1st string, as in measures 7, 8 and part of 9. After each of these melody notes, merely play the 5th string quickly after each melody note.

Be sure to play all the notes on the 2nd, 3rd strings with your right thumb.

I believe you’ll get the hang of this once you listen to me playing it on the banjo.

Very recently, “Take Me Home, Country Roads” just won the designation as the fourth official state song of West Virginia. The other three are “The West Virginia Hills,” “West Virginia, My Home Sweet Home,” and “This Is My West Virginia.”

Of course, each of these books teaches a variety of ways to dress up the naked skeleton of a wide variety of bluegrass, old-time, folk and gospel tunes.