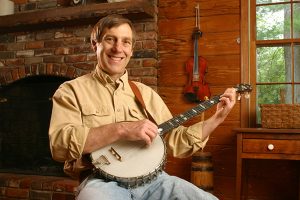 It was 1973 and Wayne Erbsen had just moved from his home in California to Charlotte, North Carolina. His aim was to dig deep into the roots of Southern Appalachian music by learning from the masters. He chose Charlotte because the area had once been a hotbed of traditional Southern music.

To his shock, Wayne discovered that little of the old music was left. Instead, North Carolina seemed intent on covering up its own Appalachian roots with concrete and embracing the new music of New York as well as Los Angeles and Hollywood, two places Wayne had just escaped from!

Realizing that the true Southern Appalachian music was on the verge of becoming extinct, Wayne was determined to ensure that this music was preserved and passed on to future generations. First, he met and learned from many of the masters of Southern Appalachian music, including Charlie Monroe, Tommy Jarrell, Kyle Creed, Albert Hash, Jim Shumate, Wiley and Zeke Morris, and Jimmy Buchanan. Wayne then began presenting programs of North Carolina traditional music to students of all grade levels. He also continued to teach banjo and guitar, which he had been doing since the early 1960s in his native California.

At that very time in 1973, the movie Deliverance came out. Although it promoted a stereotype of the Southern mountaineer, it also fired people up about the banjo. Wayne’s banjo classes at Central Piedmont Community College were suddenly filled and overflowing with people wanting to find their own roots and learn to play the banjo.

To better serve his many banjo students, Wayne typed up his lessons on an old-timey manual typewriter and offhandedly titled his book, A Manual on How to Play the 5-String Banjo For the Compete Ignoramus! Because he knew all his students personally, Wayne wrote the book in an extremely relaxed, informal style that would later become his trademark. With this book, Wayne founded Native Ground Books & Music. You can read more about Native Ground here.

Wayne has written dozens of music instruction books and songbooks for all levels, including the bestselling Bluegrass Banjo for the Complete Ignoramus. He teaches old-time music at the University of North Carolina-Asheville and at the Log Cabin Music & Cooking Center in Asheville.

As a musician, Wayne is a master of old-time, bluegrass, folk, Appalachian, cowboy, pioneer, railroad, and gospel music and music of the Civil War. He plays clawhammer and bluegrass banjo, fiddle, mandolin and guitar. Wayne has performed at across America and in western Europe. He has recorded many solo CDs and written dozens of music instruction books and songbooks. Wayne has won numerous prizes at fiddler’s conventions, including 1st place in clawhammer banjo (Galax, Virginia, 1973) and 1st place in senior old-time fiddler (Fiddler’s Grove, North Carolina, 2004).

For more than thirty years, Wayne has hosted Country Roots on Blue Ridge Public Radio. Country Roots is devoted to bluegrass and old-time country music and is BPR’s longest-running program. Listen to Country Roots on Sunday nights from 7 – 9 EST at 88.1 FM in Asheville or streaming at bpr.org.