Practically every banjo picker player dreams of being able to play by ear. What does playing by ear mean? It means playing without reading or memorizing tab.

Some lucky dogs just seem to able to pick up a banjo and just pick, seemingly without a care in the world. Don’t you just hate that? The rest of us poor schlumps have to work at it. For some people, playing the banjo is as natural as a frog jumping off a log. This article is for those of you who struggle to play by ear, but end up only memorizing a tab, at best.

For some reason, banjo players think that learning a little music theory is like getting a root canal. Well this is going to be short, sweet and far less painful. Trust me.

To play by ear, you need to know a little bit about three things: 1) Simple scales, 2) Chords, 3) Walk-ups and Walk-downs.

Secret #1: The first note of any melody will start on one of the three chord tones of whatever the chord is. For a G chord, the melody will either be a G, a B or a D. For a C chord it will be C, E or G. For a D your choices are D, F# or A. This is valuable information because to find the melody, you only have three choice. Three. That’s it!

Secret #2: The second note of a melody will be a repeat of the first note, or it will either be a Walk UP the scale, or a Walk DOWN the scale. After several walk-ups or walk downs, the melody will land on one of the three chord tones of whatever the new chord is.

So finding the melody is like playing a game of hop scotch. You jump from one chord tone to another, sometimes using a few notes of the scale in between.

Below is my attempt to illustrate the anatomy of a melody, using This Land is Your Land by Woody Guthrie. Start by orienting yourself by looking at the words at the bottom. The four words in capital letters show you where the chord changes are. The song starts on G, goes to C, back to G, then goes to D and back to G.

There are, of course, many melodies that don’t follow these simple rules. However, you can count on the fact that when you change to a new chord, the melody WILL generally be one of the chord tones of that chord. The notes in between the chord tones may jump around, but they’re always either a walk up or a walk down to one of the three chord tones. 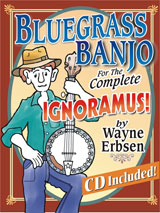 That wasn’t so bad, was it?

Once you become adept at finding simple melodies, you’re ready to start adding rolls to that melody.

For secrets of on how to add rolls to melody, grab a hold of my book, Bluegrass Banjo for the Complete Ignoramus! Find out why it’s one of the most popular bluegrass banjo books in America.